You can easily search the entire Intel.com site in several ways.

You can also try the quick links below to see results for most popular searches.

The browser version you are using is not recommended for this site.
Please consider upgrading to the latest version of your browser by clicking one of the following links.

RAID 0 (striping)
RAID 0 uses the read/write capabilities of two or more hard drives working together to maximize storage performance. Data in a RAID 0 volume is arranged into blocks that are spread across the disks so that reads and writes can be performed in parallel. This striping technique is the fastest of all of the RAID levels, especially for reading and writing large files. Real-world tasks where RAID 0 can be of benefit include loading large files into image editing software, saving large movie files in video editing software or creating CD or DVD images with a CD/DVD authoring package.

No redundancy information is stored in a RAID 0 volume. Therefore, if one hard drive fails, all data on both drives is lost. The RAID level 0 (which indicates no redundancy) reflects this lack of redundancy. RAID 0 is not recommended for use in servers or other environments where data redundancy is a primary goal. 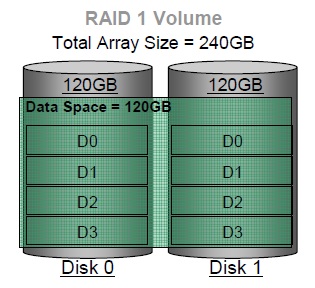 The primary benefit of RAID 1 mirroring is that it provides data reliability in the case of a single disk failure. When one disk drive fails, all data is immediately available on the other without any impact to the data integrity. In the case of a disk failure, the computer system will remain fully operational to ensure maximum productivity.

The performance of a RAID 1 array is greater than a single drive's performance because data can be read from multiple disks - the original and the mirror - simultaneously. Disk writes do not realize the same benefit because data must first be written to one drive, then mirrored to the other.

RAID 5 (striping with parity)
A RAID 5 array is three or more hard drives with data divided into manageable blocks called strips. The main benefits of RAID 5 are storage capacity and data protection.

Parity is a mathematical method for re-creating data that was lost from a single drive, which increases fault tolerance. The data and parity are striped across all the hard drives in the array. The parity is striped in a rotating sequence to reduce bottlenecks associated with the parity calculations.

Because parity is used for data protection, up to 75 percent of the total drive capacity is usable. One drive can fail and it is possible to rebuild the data after replacing the failed hard drive with a new drive. The extra work of calculating the missing data degrades the write performance to the RAID 5 volume while the volume is being rebuilt.

The read performance of a RAID 5 array is greater than a single drive's read performance because data can be read from multiple disks simultaneously. Disk writes do not realize the same benefit because parity must be calculated and written to all the drives.

To enhance the write performance of RAID 5, Intel® Rapid Storage Technology (Intel® RST) uses a RAID 5 volume write-back cache and coalescer. The volume write-back cache allows writes to be buffered and improves coalescing. The cache is disabled by default, but the user can enable it through the user interface. An uninterrupted power supply (UPS) is recommended for use if the cache is enabled.

The coalescer allows write requests to be combined into larger requests to reduce the number of I/Os per write for parity calculations. The coalescer is enabled by default, and the user does not have the option to disable it.

RAID 10
A RAID 10 array uses four hard drives to create a combination of RAID levels 0 and 1 by forming a RAID 0 array from two RAID 1 arrays.

The primary benefit of RAID 10 is that it combines the benefits of RAID 0 performance and RAID 1 fault tolerance. It provides good data reliability in the case of a single drive failure. When one hard drive fails, all data is immediately available from the other half of the mirror without any impact to the data integrity. In the case of a disk failure, the computer system will remain fully operational to ensure maximum productivity. Data fault tolerance can be restored by replacing the failed drive.

Matrix RAID
Matrix RAID allows you to create two RAID volumes on a single RAID array. The two volumes can be the same type, or they can be different.

For example, on systems with an Intel® I/O Controller Hub 10R (Intel® ICH10R), Intel RST allows you to create a Matrix RAID configuration that uses RAID 0, RAID 5, or RAID 10, as well as continuing to provide the benefits of RAID 0 performance and RAID 1 protection on two hard drives.

A Matrix RAID configuration with RAID 0 and RAID 5 on four hard drives provides better data protection than RAID 0, by providing one volume of RAID 5 storage where data can be protected from a single hard drive failure. Also, Matrix RAID can provide greater total storage capacity and improved performance than RAID 5 alone.

RAID-ready
A RAID-Ready system is a configuration that enables a seamless migration from one non-RAID SATA drive to a SATA RAID configuration. A reinstall of the operating system is not required.

A RAID-Ready system must meet the following requirements: